Noise Absorbing Materials are Becoming a Necessity for Restaurants

Tiffany Hsu of the LA Times, who has been writing about noise levels in some of Los Angeles’s trendiest restaurants for some time now, made another discovery in her restaurant noise coverage: noise seems to attract a younger crowd.

But noise also attracts some unwelcome feedback when customers can’t hold a conversation during their meal.

According to Hsu, L.A.’s hippest restaurants go all out to dazzle – creative menus, polished and stylish staff, and décor that ignores the concept of acoustic balance. The solid surface interiors of many of LA’s most popular restaurants are stripped of anything that might absorb noise, like carpeting, drapes – even certain types of seating that can help buffer noise.

Instead you have stainless steel, concrete, glass and wood, with dishes clattering, music blaring, voices raised in attempted conversation, cavernous ceilings and concrete or wood floors. Noise levels in some of these restaurants can exceed 110 decibels on a busy night, and that’s loud enough to cause hearing damage and health problems in employees and anyone else who spends more than couple of hours inside.

On a recent night at the extremely popular Bottega Louis in downtown Los Angeles, Hsu hung out and interviewed some diners, all young, hip, and you’d think impervious to noise. But they’re not, as 21-year-old Cal State Northridge student Kristina Pivnyuk made clear on her way out. She’d arrived with friends hoping for a nice evening of quiet conversation, a good meal, maybe a couple of glasses of wine, but what she got was irritated, as the restaurant’s blaring noise levels prevented any hope of conversation or relaxing.

“It kind of ruined the experience for me,” she told Hsu. 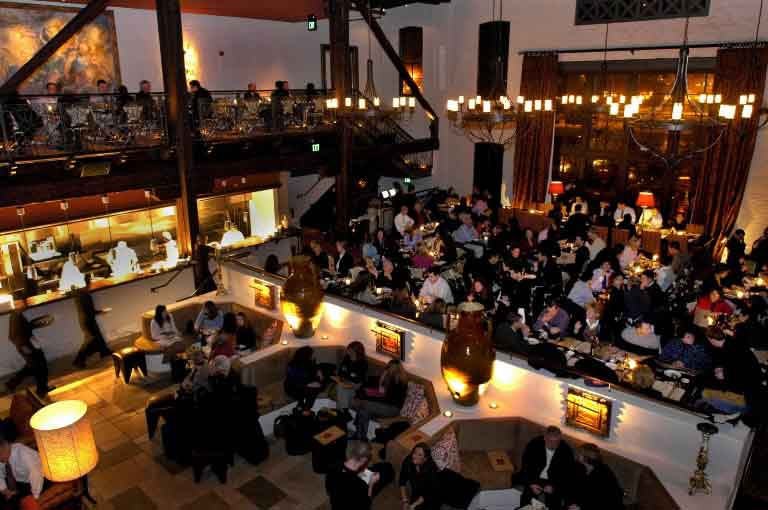 Now, I have mentioned this before, but for good measure I will mention it again: Restaurant review sites have added noise levels to their ratings criteria, and people are checking them before they make a reservation.

Yelp began the trend of including noise levels in its ratings, and the rest have all followed suit.

Zagat, perhaps the most highly regarded restaurant ratings guide, added noise to its famous surveys on customer satisfaction and discovered that noise is the second most complaint-generating problem in restaurants today (second only to lousy service). In 2010, 12 percent of Los Angeles restaurant goers ranked noise as the top problem they have with restaurants. By 2011, that percentage jumped to 18 percent.

Some restaurateurs are already beginning to install noise abatement and sound absorbing elements in their restaurants since the noise category became a standard in their rating. But old standards for noise control – carpeting, heavy fabrics, popcorn ceilings and bulky panels have been replaced by more effective, less visible noise deadening products engineered specifically for this purpose.

Architects are dealing with open kitchen concepts that are so popular in today’s restaurants by lowering the ceilings and adding noise absorbing materials in ceilings and walls in work areas.  In the downtown LA restaurant Baco Mercat, noise abatement material installed throughout took once unbearable noise levels down so significantly, Chef Josef Centeno said it worked wonders.

And as the Yelp reviews for Bottega Louie began to add up, mostly from people who complained of losing their voices over the din (exacerbated by the restaurant’s high ceilings, marble floors and bare walls that create an echo chamber with no sound absorption anywhere), Bottega Louie management installed sound absorbing material under the chairs and banquettes, turned the once blaring music way down, and even re-trained their servers to avoid clanking plates in the course of delivering meals and clearing dishes.

You have to commend Bottega Louie for addressing their noise problem as promptly as they did, too. Their stark, marble, high-ceilinged restaurant was obviously designed for a visual aesthetic, but the design put no thought into the serious noise tunnel it was creating, a problem more and more architects are addressing during the design phase.

Hsu points out that, combined with the hard-surface designs of late 20th and early 21st century restaurants, prices have fallen considerably on audio equipment in recent years, allowing more restaurants to install upgraded sound systems, and then crank the music. Restaurants that survived the recession were more concerned with customer turnover than aesthetics, and began the horrifying practice of cramming tables together to seat more diners.

Some misguided restaurant managers even took it a step further after some studies came out that revealed customers drink more, chew faster, and finish their meals faster when music is cranked to unsavory decibels! For anyone who has ever eaten in one of these establishments, you’ve probably experienced your blood pressure rise, your heart race, and possibly left with your head pounding to the beat of whatever was blasting from the sound system as you chewed as fast as you could.

Other trends added to the cacophony – a foodie culture gone viral thanks to social networking, smartphones and Yelp, and the rising popularity of communal dining all combined to give younger diners the impression that noisy meant good, while older diners and professionals fled these eateries, however, and sought quiet alternatives to eat in peace and quiet.