Information on the Impact of Noise in Restaurants

It was a Thursday night and I was on my way home from a business networking function. I was hungry and the NBA finals game was on TV so I thought, “is there something good in my neighborhood?”So I pulled into Applebee’s and walked toward the door. A couple exited while I was walking up toward the door and the sound of Darius Rucker’s song Wagon Wheel roared out the open door. I thought to myself, did that just come from Applebee’s or someone’s car stereo. So I entered the door and low and behold, Applebee’s had become part restaurant and part night club complete with a live DJ and loud amplified speakers. What was with all this restaurant noise, I thought?

I grabbed a wooden bar table which was located a few feet from the large wooden center bar. The server approaches and oddly leans in within about 2 inches of my face and asks what she can get me tonight. So I order an old favorite.

After listening to the songs Radioactive by the Imagine Dragons, All My Ex’s Live in Texas by George Straight, and Blurred Lines by Robin Thicke Feat at night club level, my chicken quesadilla arrived jumping and bumping. With my foot tapping, my head bobbing, and eyes focused on the basketball game, I set out to enjoy this normally reliable late night appetizer. But after a two pieces, it just wasn’t as tasty as it normally is. Something seemed different to my senses even though it looked the same. I even opened up a few pieces to check the ingredients inside the shell. What was going on? Should I complain to the manager about the taste? What if it’s not the food, but it’s me?

So I did what anyone who works for a sound proofing company would do; pull up the sound meter app on my Galaxy S3 smartphone and take a few readings. They read 87, 89 and 89 decibels. Those levels seemed more like night club noise levels than comfortable restaurant noise levels. Regular conversational speech occurs at approximately 60 decibels so patrons had to talk at louder levels which increased the total sound levels for the room. A vacuum cleaner runs at about 70 decibels and a garbage disposal at 80. Traffic on a busy roadway reaches sound levels between 80-90 decibels. A jackhammer can reach 100 decibels. A 10-12 decibel difference in sound level is perceived as half the sound to the human ear.

Then it hit me. Was this abnormally loud music interfering with my ability to experience the same taste as I normally do when the DJ is not playing loud music?

My Food Was Drowning in Loud Noise

An article I read earlier that day for a project popped into my head. The article was on The Scientific American website and was titled, “Restaurant Noise Can Alter Food Taste.” It said a noisy restaurant may drown out the taste of your food, making it bland. That’s exactly how my normally tasty quesadilla was tasting: bland. The Article referenced a study in the Food Quality and Preference Journal titled, “Effect of background noise on food perception [A.T. Woods et al].”

In the study, researchers recruited 48 college students, and fitted them with headphones playing either loud white noise, soft white noise, or nothing at all. Then the participants closed their eyes and chomped on snack foods like Pringles potato chips and cookies. The researchers discovered that the students listening to blaring static rated the chips as less salty and the cookies as less sweet—even though they were tasting the same foods as the other groups.

Other studies have shown that sound can interfere with how the brain processes smell; the researchers say the same could be true for taste. Does loud noise divert attention from the food’s flavor? 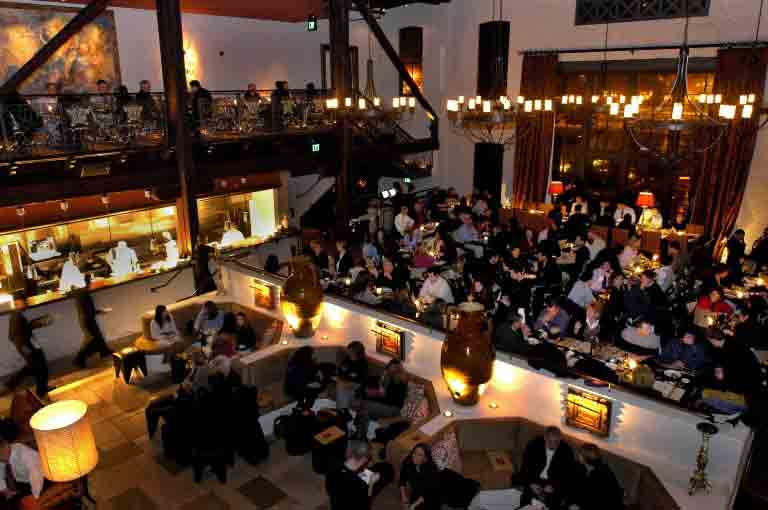 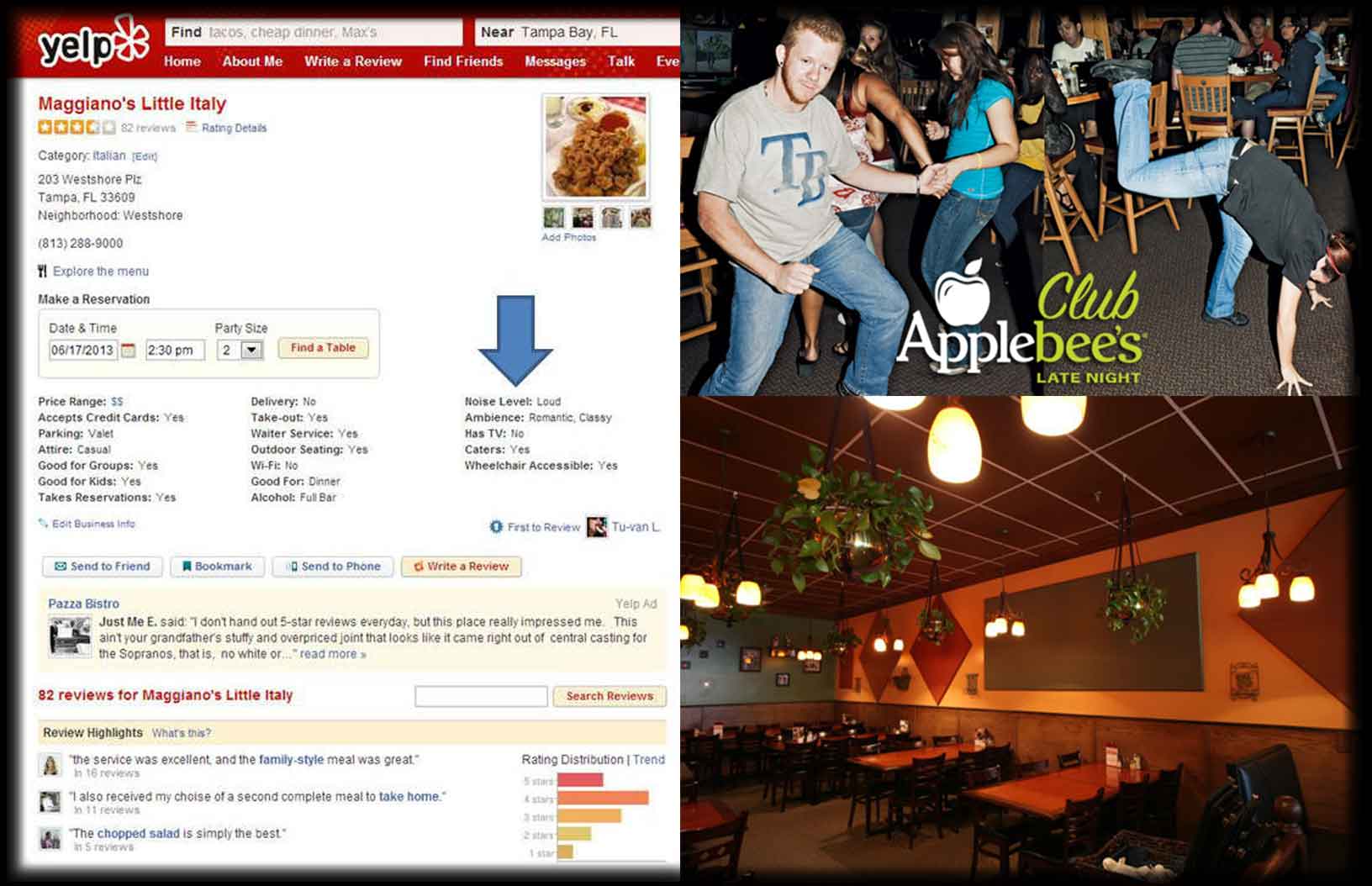 Establishments are putting thought into what they want their customers to hear. But why? Is it all about atmosphere? Not according to science. First, when you eat in places with high noise levels, you lose the ability to accurately gauge how sweet or salty your food is. It has to do with the way your brain is wired — continual loud noises whip the neurons of your ear up into such a rage that for no reason they stage an all-out assault on the weaker neurons of your taste buds.A cynical person could say that restaurants with lower quality food crank up the noise so that you’re less likely to notice it, but we have no way of knowing that (maybe they just think the music adds to the “fun” atmosphere).

Diners and restaurant critics seem to agree that the noise level in a restaurant can make or break the dining experience. It’s a fine balance. If there’s too much noise, customers may feel crowded and overwhelmed. Excessive noise can also lead to anxiety. If there’s too little noise, customers may feel like their conversations can be overheard by absolutely everyone in the place.

According to the nationwide Zagat survey, noise has become the second-biggest complaint among diners, behind lousy service. In Los Angeles, 18 percent of diners ranked noise as their top peeve in 2011, up from 12 percent in 2010.

– Human conversation: Diners hold conversations during dinner. Multiply this noise by the hundreds, plus add in noise from other sources that cause diners to have to talk at higher than normal sound levels, and it often creates a very noisy environment.

– Building systems: This equipment can cause unwanted noise. A loud HVAC system can cause a build-up of noise forcing diners to increase their noise level. Noise from plumbing pipes can also be an unwanted noise source.

– Music: Most restaurants play music in the dining area which can cover other annoying sounds, such as HVAC or plumbing noise. Some play live music. If a restaurant is very reverberant and has high ceilings and a lot of reflective surfaces, music can add to the high noise problem.

– Exterior, Traffic and Roadway Noise:  Noises from outside the restaurant, like traffic, construction, or the nearby neighborhood can also impact the interior of the restaurant. This can be a serious problem for restaurants near major highways, roadways, railways or airports.

– Adjacent Occupancies – Restaurants in shared buildings can get noise from adjacent occupants through walls between the two spaces.

– Public Address Systems/Intercoms – Some restaurants use loud intercom systems, which project sound, in their waiting areas during busy times to let then know their table is ready.

– The Kitchen: Many restaurants now have open kitchen designs, however in all kitchens, noise sources include clanging of pots, pans and dishes and talking among kitchen employees and service staff.

A room’s acoustics have to do with the way sound travels, echoes, reverberates and resonates inside it. Concert halls, for example, are specifically designed to have just the right amount of reverberation. In many restaurants, there is very little sound absorption in these large rooms. especially in newer restaurants, and as a result, restaurant noise levels are on the rise despite many people not even realizing it.

Some restaurateurs are getting the message however and are looking for a middle ground between aesthetics, atmosphere and acoustics. At Applebee’s that night, they were playing louder than normal music more in line with night club sound levels. This type of special night is part of Applebee’s efforts to bring excitement back into the restaurant in the evenings when they have drink and food happy hour prices. However, hard surfaces in the restaurant, such as the large wooden center bar; wooden tables, stools, booth benches; wooden tables and wall paneling, and hard tile floor adds to the reflective nature of the noise.

The way sound vibrations and waves behave affects the sounds we hear. Like any wave, a sound wave doesn’t just stop when it reaches the end of the medium or when it encounters an obstacle in its path. Rather, a sound wave will undergo certain behaviors when it encounters the end of the medium or an obstacle. Possible behaviors include reflection off the obstacle, diffraction around the obstacle, and transmission (accompanied by refraction) into the obstacle or new medium

When a sound wave hits a hard, smooth surface, it bounces off it and changes direction. The hard surface reflects the sound in the same way as a mirror reflects light. Rigid, hard surfaces, such as wood, stone, brick or tiling (all commonly used materials in restaurants), reflect the most sound. The reflected sound waves travel back past your cars, so you hear the same sound again. Any sound energy that is not reflected is either absorbed or diffused. If it is absorbed, the energy is soaked up by the material. If it is diffused, it bounces off the surface but the waves are scattered and the sound becomes muffled.

There are many acoustical products that can be used to quiet restaurant noise such as sound panels, baffles, wall covering, ceiling panels, and acoustic insulation.

Many restaurant owners mistakenly attribute loud noise to a positive user experience. They think if it’s a busy, bustling and noisy place, the customers will have a good experience. Noise can be a good thing, but only if it’s controlled and not seen as a nuisance. So restaurant owners, like most in the residential and commercial building industry, are still only mildly incorporating acoustics planning into new construction projects.

Using modern acoustical materials such as Acoustiblok’s QuietFiber and Indoor Sound Panels, can reduce restaurant noise. The unique thing about it is its high NRC which is 1.00 unlike normal sound panels. This material can be wrapped with any fabric and put underneath tables, bars, on top of other places where you cannot see it. But nonetheless, it’s a point of sound absorption in which the sound will decay and not reflect off of. The more material that you can put in a room, the easier it is for dialogue and articulation with conversations of multiple people.