AcoustiFence® & Its Effect on the Noise of Pickleball Courts

YUMA, Ariz., April 3, 2013  – Acoustifence soundproofing material placed around a pickleball court reduced noise by 10-12 decibels in a sound meter test conducted by USA Pickleball Association president Bill Booth on April 17, 2012 at the Country Roads RV Village pickleball courts in Yuma, Ariz. This represents more than a 50 percent reduction in sound as perceived by the human ear the report concludes.

Even as one of the fastest-growing sports in the United States continues to gain new participants and fans every day, pickleball is disturbing some neighbors and communities who don’t want the courts around because paddle noise has become a nuisance issue for some people living close to the courts.

In addition to being one of the fastest-growing sports in the United States today, pickleball has spread overseas into Canada, Singapore, India, Pakistan and other places. According to the USA Pickleball Association, the sport boasts an estimated 100,000 adult players in the United States now, more than triple the number in 2003. There are about 2,500 public courts, versus just 150 in 2003.

For decades, the game of pickleball was little known outside the Pacific Northwest United States. Since its inception in 1965 as a backyard pastime, it is now an organized sport represented by national and international governing bodies. While people ages 6 to 70-plus play pickleball and even compete in local, regional and national tournaments, the main driver of the recent growth is the 55-plus demographic who have taken a liking to the sport. They view it as a way to exercise, burn calories, socialize, and get outdoors. More and more pickleball courts are being built in community parks and especially into 55-plus housing developments. Some communities are converting sporadically used tennis courts into pickleball courts or painting additional lines on tennis courts so pickleball can also be played. Pickleball is played on a smaller court size than tennis but has a similar court design.

More courts, participants, tournaments, and attention to the game has brought on more public complaints and even noise or nuisance related lawsuits attempting to stop play on existing courts or stop construction of new courts.

Racket and paddle sports like tennis, badminton, and table tennis (ping pong) each produce a unique sound when the racket or paddle hits the ball. In pickleball, there is a “ping, ping” sound made when the paddle hits the ball because the sport uses medium-sized, solid faced wooden, composite or graphite paddles and a hard plastic perforated ball (resembles a Wiffle ball) that is larger, stiffer and less resistant than a tennis ball. The noise generated by the game is louder, sharper and at a higher pitch than tennis which generates a deeper “thwack” sound that registers far lower on a sound meter. 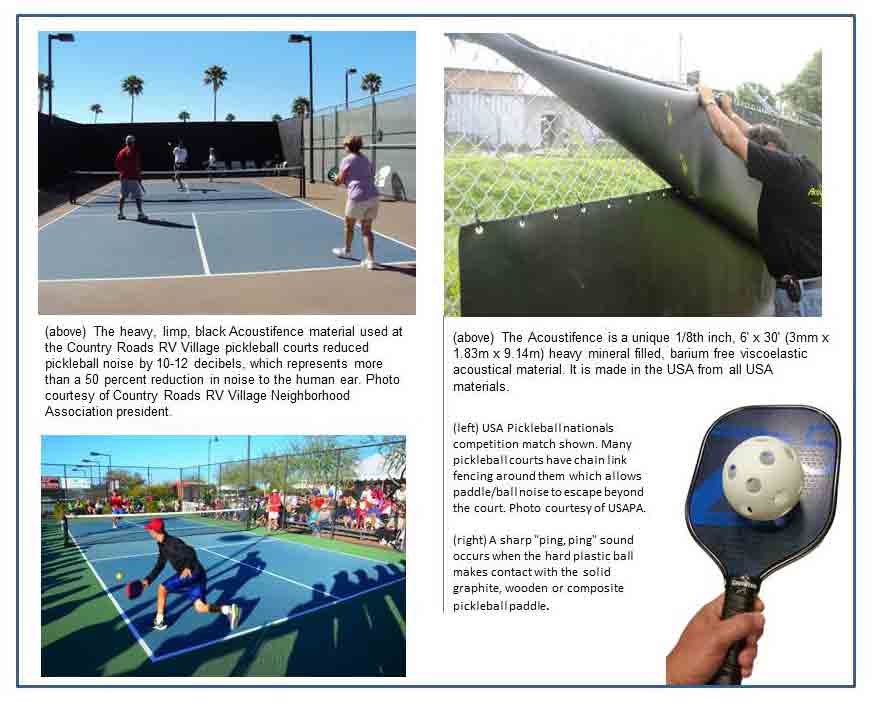 Pickleball paddle noise is in a sound classification called impact noise – noise that occurs when an object collides with another object. It is a high frequency noise that is at a frequency that our ears are most attuned to. Through Acoustiblok’s analysis and modeling efforts of various pickleball noise related projects, the company says there’s one limiting band of approximately 1.25 Khz (1250 hz) that spikes when the paddle hits the ball. Acoustifence blocks much of the noise and reduces it to below a nuisance level for nearby neighbors, becoming barely perceptible among other outdoor background noises such as automobile, airplane, human, and machine noise.You can hear the pickleball paddle noise for yourself by watching the following YouTube video of a tournament match at: http://www.youtube.com/watch?v=pdVMcIDQJlA [http://www.youtube.com/watch?v=pdVMcIDQJlA __title__ USA Pickleball Association nationals competition]

Unlike often tried natural sound barriers such as fences or shrubs, the Acoustifence material does extraordinarily well in not only blocking direct sound, but also has a tendency to reduce sound from reflecting off it. Acoustifence is a revolutionary heavy mineral filled viscoelastic polymer sound deadening material which is only 3mm (1/8 inch) thick. It’s made in the United States and compared to other soundproofing alternatives, is an economical way to reduce outdoor noise.

The ultraviolet (UV) tolerant Acoustifence is hung via grommets onto the top line of existing chain link, panel, security or support pole fencing systems. It comes in 6 X 30 foot-sheets and can be easily cut and shaped into custom sizes with a craft knife. On solid structure fence surfaces, Acoustifence can be installed by nailing, stapling or gluing. Acoustifence is one of the most effective first steps in reducing outdoor noise. The amount of noise Acoustifence reduces however is much related to other reflective structures in the area. More details on Acoustifence can be seen at: https://testsite.acoustiblok.com/acoustical_fence.php

Country Roads RV Resort is a 55-plus gated community which boasts 150 acres of lavish, mature landscaping and 1294 privately owned home sites. The Acoustifence testing was conducted by USA Pickleball Association president Bill Booth. Tests were made using a Sper Scientific Digital Datalogging Sound Meter (model 840013), a S-Type Composite Extreme Paddle, and New Dura Fast 40 outdoor balls. Tests were made with the tester attempting to hit the ball with maximum force for a worse-case scenario. A series of readings were taken both through the Acoustifence sound curtain and with no sound curtain. Readings were recorded with the meter at 50 feet from the point of impact. In the first case, the reading was even taken through the sound curtain next to a nearby home at a point 42 feet from the sound curtain. The paddle was 8 feet inside the court for a total of 50 feet. The second set of readings was recorded inside the court at a distance of 50 feet from the point of impact.

With no sound curtain, readings ranged from 64.2 – 71.8 decibels for an average of 68 decibels. Through the Acoustifence sound curtain, the meter readings were between 54.7 – 59.2 decibels for an average reading of 56.7 decibels. The report concluded that an 11.3 decibel reduction in sound was achieved. This represents more than a 50 percent reduction in sound as perceived by the human ear by nearby homeowners. That reduction in sound takes the pickleball noise from being annoying to someone to being just barely perceptible, the report conclusion stated. The report also recommended that the Acoustifence product be installed on the inside of the pickleball court if the fence posts are outside the court. The report went on to say that homeowners near the Country Roads RV Village pickleball courts who had the most complaints and lived closest to the courts reported a significant reduction in sound level from having the Acoustifence material up. He said that his wife often does not realize that they are playing on the court. At times, ambient noise significantly exceeded paddle noise.

Lahnie Johnson is president and founder of Acoustiblok, Inc., a NASA spinoff listed company in Tampa, Fla., that invented and manufactures the Acoustifence product.

“Like all our products, Acoustifence is made in the USA with all USA materials. Besides the primary benefit of reduction in perceived noise levels, there are many reasons why Acoustifence is being used not only in the United States, but across the globe for many applications,” he said.

Paul Getts, is an Acoustiblok sales associate who has worked with various pickleball related customers.

“There are many reasons why Acoustifence is a good solution for pickleball noise. For homeowner associations and developers, Acoustifence easily attaches to existing fencing found around most existing pickleball courts and complexes and can be put up in a matter of hours with a few minor hand tools. It is easily configurable to add height and length so it can be used on fences of any size. The material is paintable to meet the needs of the environment,” said Getts.

“There are vinyl photographic coverings for the fence called Acoustiblok landscapes. Hundreds of different unbelievably realistic landscapes are available, from vines and flowers to even antique brick wall, or stone fence photographs. So real one of our customers drove right by their home forgetting they had it installed,” he added.

“Acoustifence is also one of the best priced first response soundproofing solutions in the industry,” Getts added.

Melissa Wood is community association manager at Country Roads RV Village. In a related World Fence News article about pickleball and Acoustifence, she said, “I can attest that Acoustifence material is not difficult to install, can be easily blended into the aesthetics, particularly if you have existing wind screens.” She added that Country Roads RV Village is located near Phoenix and other communities have seen the installation and have inquired about it.

Besides pickleball, Acoustifence is commonly used to quiet generator and motor noise at industrial sites, highway and construction related noise on bridges, mass transit rail line noise, shooting/gun range noise, and even dog kennel noise. It is also being used at college sports complexes and athletic parks and on private backyard residential fences to create a quieter and more peaceful environment.

“People are discovering that there are a lot of great uses for this modern day soundproofing product,” Johnson said.

Johnson went on to say, “We’re not just a soundproofing products company, we’re a noise solutions company. Sometimes, prior to the sale of Acoustiblok’s products, we perform computer-based sound propagation modeling when customers are unsure if Acoustiblok’s materials will work in their specific application.

“We use advanced software called Cadna-A, a top acoustical software made by DataKustic used in the prediction of environmental outdoor noise. It calculates sounds through mediums and different barriers and terrains. We have used it for pickleball-related customers who all have a different set of circumstances associated with their noise. We also use DataKustic’s Cadna-R software for prediction and presentation of inside noise in industrial facilities, rooms and workplaces.”

“We use this acoustical modeling to say to the potential customer ‘here’s your noise level now without Acoustiblok’s material and here’s the noise level with our material based on the noise information we have available to us right now.’”