Owl Feathers May Provide the Key to Acoustic Stealth

Researchers have figured out something about owls that airports would like to get their hands on to reduce noise pollution…Owl feathers.  Owls are known to have the unique ability to fly without making a sound.  Turns out their feathers are designed for a quiet flight so they can hunt prey in acoustic stealth.

Aircraft designers are trying to figure out a way to use what they know about owl feathers to mitigate aircraft noise. They just have to figure out how that would work.

Researchers at England’s Cambridge University have been studying the owl’s wing structure to get a better understanding of exactly how it flies quiet so they can apply nature’s engineering to aircraft design. Aircrafts are among the worst contributors on earth, and no stone that might help solve the problem will be left unturned.  No feather either.

The Cambridge researchers are scheduled to present their findings to the American Physical Society’s (APS) Division of Fluid Dynamics this week in San Diego.

Justin Jaworski, of the Department of Applied Mathematics and Theoretical Physics at Cambridge says that many owl species have developed specialized plumage to effectively eliminate the aerodynamic noise from their wings, which allows them to hunt and capture their prey using their ears alone.

“No one knows exactly how owls achieve this acoustic stealth, and the reasons for this feat are largely speculative based on comparisons of owl feathers and physiology to other not-so-quiet birds such as pigeons,” Jaworski says. 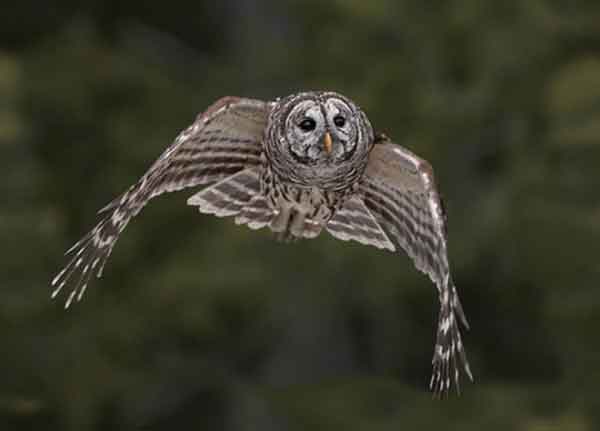 All wings, whether they are created in nature or engineered by Boeing, create turbulent “eddies” as they cut through the air. An eddy is a current of air running contrary to the main current; it can also manifest as a circular current like a whirlpool.

When these eddies hit the trailing edge of the wing, they become audible and even amplified, and they scatter as sound. This is why conventional aircraft with their hard trailing edges are particularly noisy.

On the other hand, owls possess at least three distinct features that are believed to contribute to their ability to fly in silence, eddy or no eddy: First, the leading edge on the owls’ wings are serrated like a comb. Second, the trailing feathers on the back end of the wing are tattered like the fringe of a scarf. And third, the rest of the owls’ wings and legs are covered in velvety down feathers.

The serrated feathers on the leading edge of owl wings have more to do with keeping the raptors stable than quiet, but the fringe on owls’ trailing feathers allows for “a very large noise reduction at the speed owls fly.” The owls’ tattered fringe feathers help to break up the sound waves that are generated as air flows over the top of their wings and forms downstream wakes.

One more thing: the velvety down feathers found elsewhere on owls’ wings and legs absorb the remaining sound frequencies above 2,000 hertz, making owls completely silent to their prey.

Ornithologists have been fascinated by the silent flight of owls since ornithologists first began watching them. No other birds fly with such stealth. But can the remarkable structure of owl wings and feathers be replicated for aircrafts? And if so, how hilarious would that look?

Some ideas being tossed around include a retractable, brush-like fringe to mimic an owl’s trailing feathers, and applying a velvety coating to aircraft landing gear.

Researchers are still trying to figure out if it is just one of these attributes or a combination of all three responsible for the noise reduction.  But they have been working on figuring out owl stealth by developing a theory for the owl’s noise mitigation skills from the trailing edge of its wing – typically man-made wing’s dominant noise source.

Unfortunately, when it comes to aircraft design, noise reduction still takes a backseat to fuel efficiency. But researchers are optimistic that lessons learned from the study of owl feathers may have the potential to influence the frequency and locations of aircraft takeoffs and landings. And that could make a big difference in airline efficiency. Major airports such as London’s Heathrow and Chicago’s O’Hare place restrictions on the amount of noise any airline can make in a day. If the airlines manage to dampen sound generated by their aircrafts, they are permitted to enlist more flights without threatening to exceed their noise pollution cap.

Remember, the owl has been enjoying its silent flight for some 20 million years. Along comes the human in search of something that will effectively cure aircraft noise pollution, and we think there might be some hope in owl feathers. We’ve got a long way to go. I Give it another 20 years.